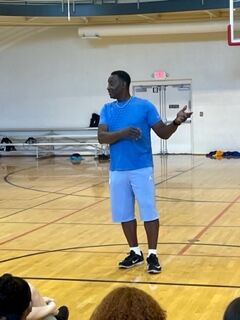 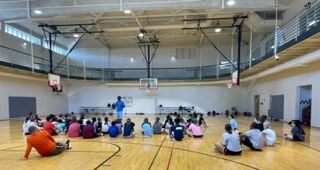 Student athletes attending the Altavista Area YMCA Youth Basketball Camp on June 9th got a visit from a surprise speaker – one who helped them level up all aspects of their game.

That speaker was Altavista alumnus and class of 2021 Altavista High School Athletic Hall of Fame inductee, Micah Moon. He played football, basketball, and ran track at ACS before graduating in 1981. He then went on to play football at the University of North Carolina on a full scholarship before going to play in the NFL.

The speech wasn’t initially planned, and Altavista Combined School Boys Basketball coach, Casey Johnson, said that it all happened because of a stroke of luck.

“It was honestly like finding a lottery ticket on the ground and picking it up. He happened to be walking in front of me to enter the YMCA when I got there Thursday morning for camp,” Johnson said. “He’s a Colonel, and he grew up at the YMCA. It was a no-brainer to ask him to speak about anything.”

Growing up, Moon spent a lot of his time at the YMCA, and he notes that it was there that his passion for athletics flourished.

“It all really started back there. People cared about me,” Moon explained. “I think that’s where a lot of things definitely start.”

Moon spoke to the athletes and encouraged them, saying that they, too, could be successful, and that the YMCA is setting them up for that success.

“Take advantage of it the right way. It’s a nice gym and a nice facility. Just come to this gym and lift weights, work out, and continue to work on your game,” he said. “People are showing that they care about you because they’re giving you this and letting you use it.”

Moon referenced his years in Altavista multiple times throughout his speech, even pointing out Steve Jester in the crowd, who had been his basketball coach many years before.

“I thought the neatest part of his speech was when he referenced Steve Jester, who was able to be in the gym listening,” Johnson commented. “When he points up and says, ‘that was my coach 50 years ago,’ people are like, ‘oh my gosh, that’s the coolest thing! His coach is actually in the building.’”

After his speech, the athletes had the opportunity to ask questions and gain advice from the hall-of-famer, and Johnson said that the athletes took a lot away from the “unbelievably lucky” experience.