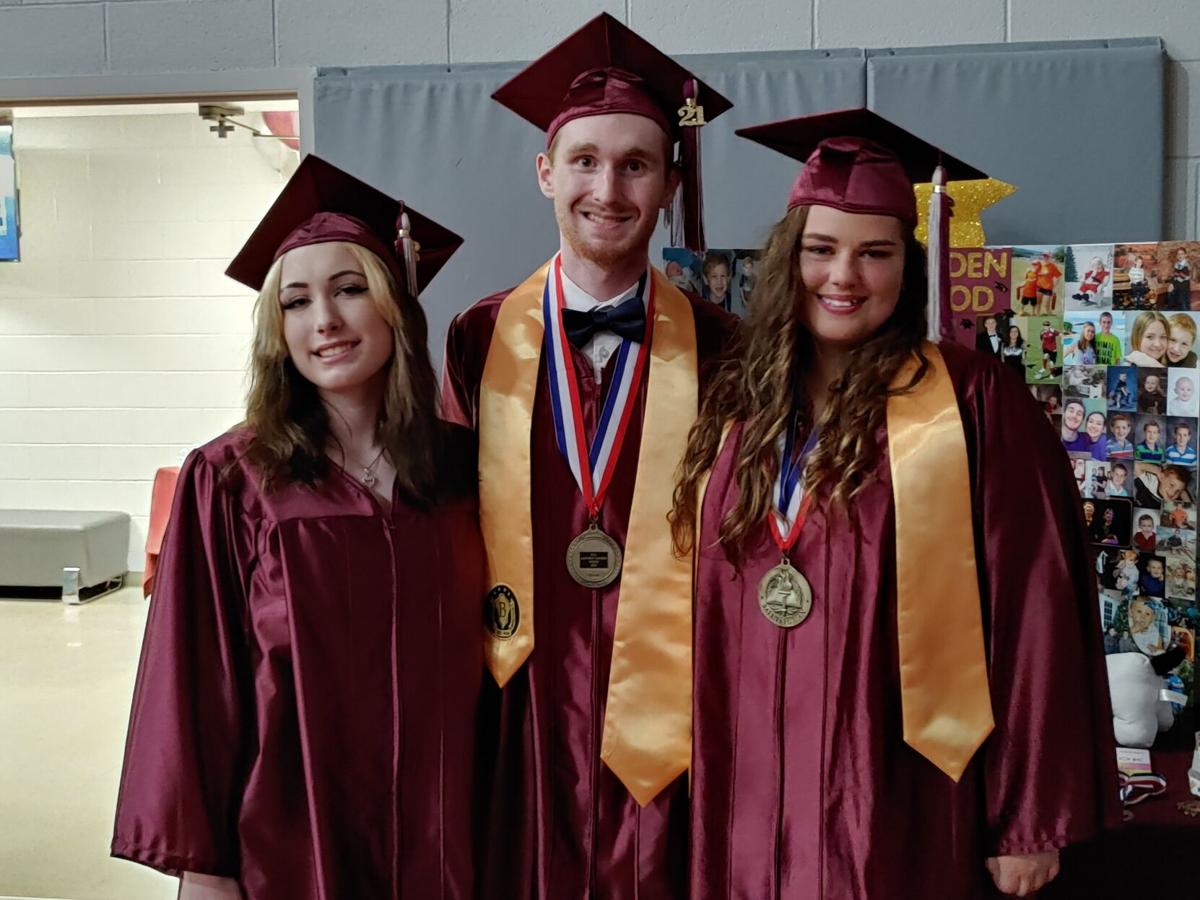 FCA’s class of 2021 are all smiles following their commencement exercises. From left: Layla Ammon, Hayden Wood and Courtney McCormick. 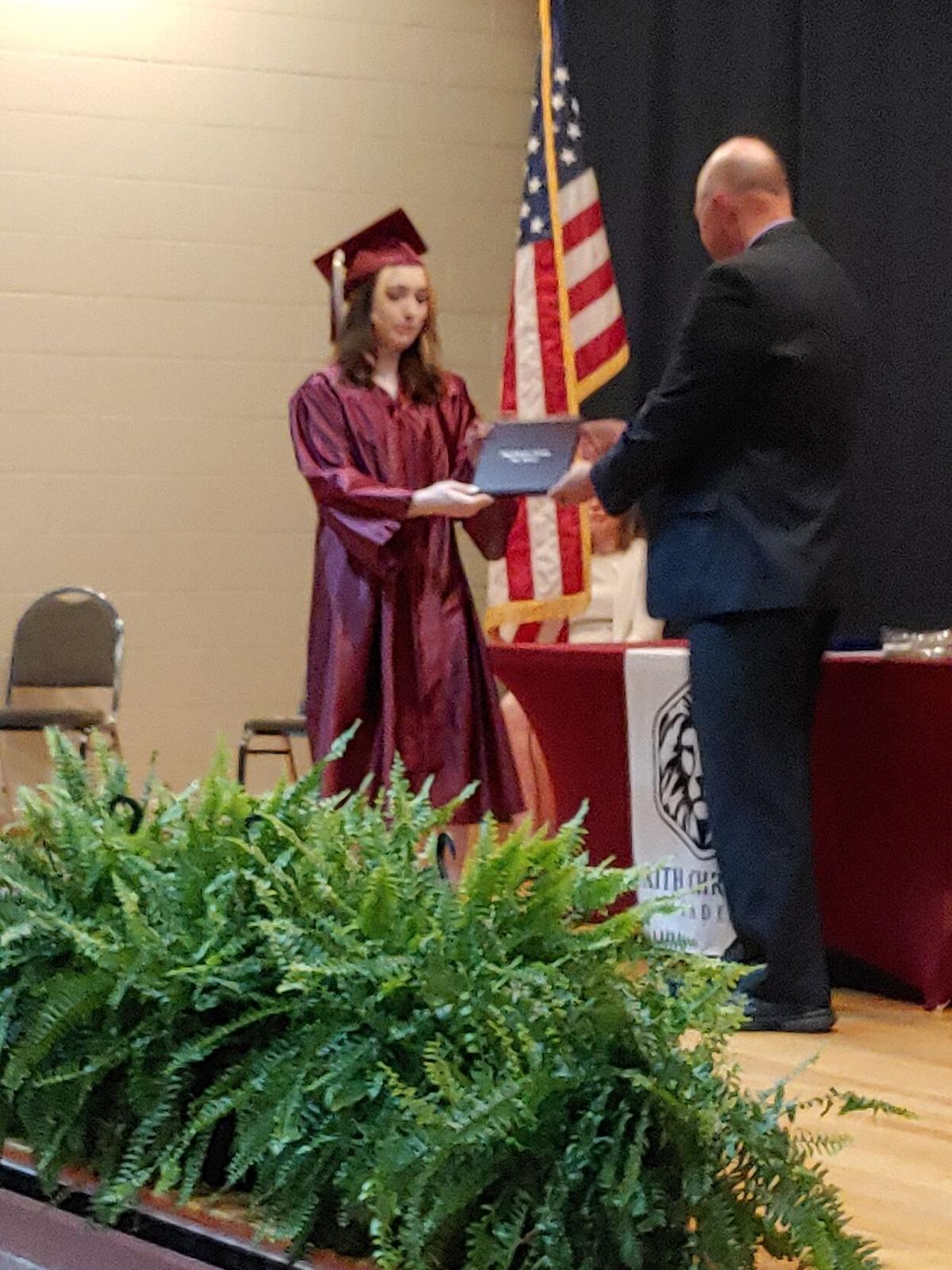 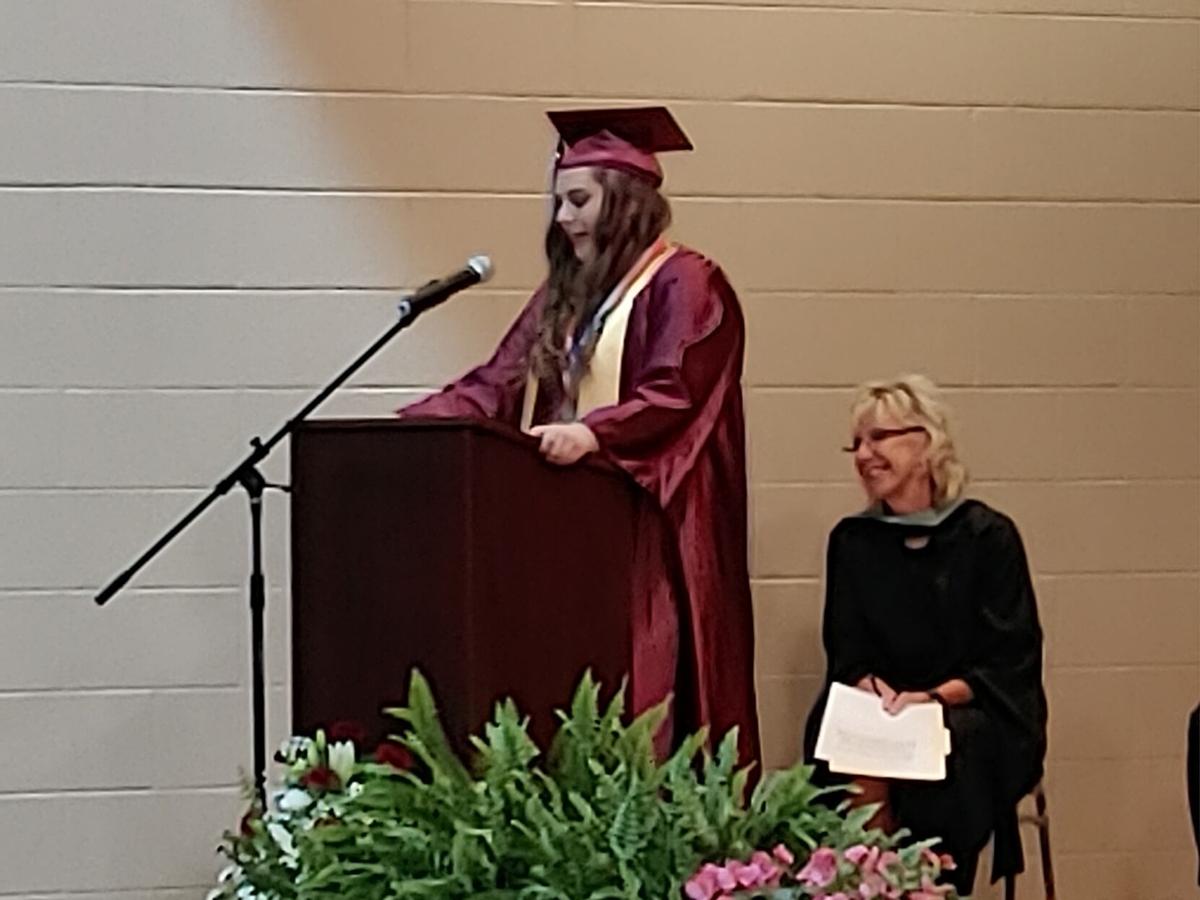 Courtney McCormick delivers the salutatorian address at FCA's graduation on Friday in Hurt as Head of School Lisa Moore listens. 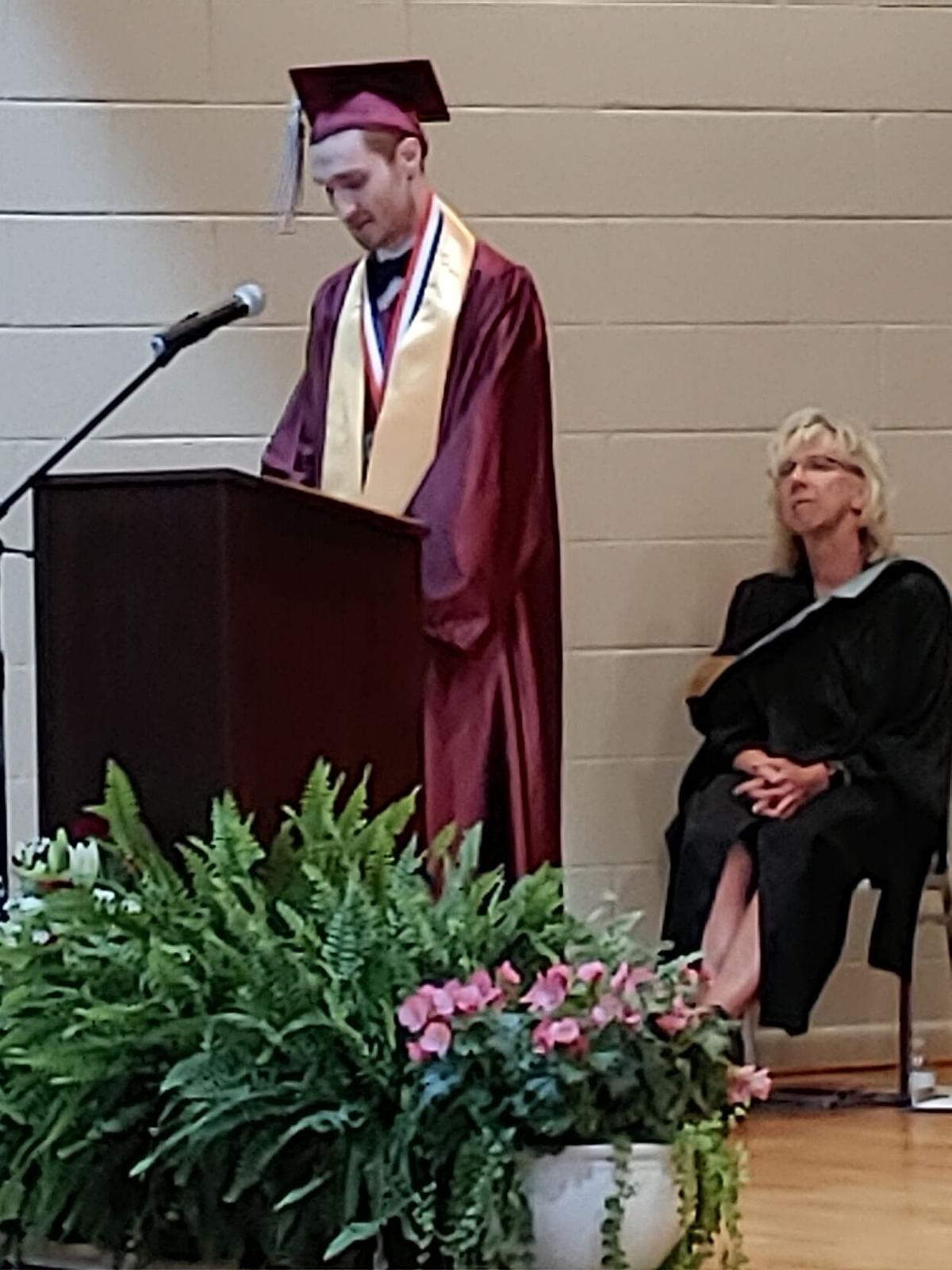 Hayden Wood delivers the valedictory at FCA's commencement on Friday.

FCA’s class of 2021 are all smiles following their commencement exercises. From left: Layla Ammon, Hayden Wood and Courtney McCormick.

Courtney McCormick delivers the salutatorian address at FCA's graduation on Friday in Hurt as Head of School Lisa Moore listens.

Hayden Wood delivers the valedictory at FCA's commencement on Friday.

The Class of 2021 at Faith Christian Academy in Hurt reached a major life milestone last Friday when they graduated from high school. The school’s 19th annual Commencement exercises took place in the school gymnasium.

Two of the students, Hayden Wood and Courtney McCormick, spent 13 years, since Kindergarten, at FCA. These two were also the valedictorian and salutatorian, respectively.

In his valedictory, Wood observed, “when you have only three students in your class, you tend to become best friends.” He shared memories of good times with classmates and teachers and provided words of encouragement to the underclassmen. He exhorted them to enjoy their time in school and doing activities “because once you have a job,” everything changes.

Wood also quoted from Proverbs 3:5-6, “Trust in the Lord with all your heart, and do not lean on your own understanding. In all your ways acknowledge Him, and He will make straight your paths.” He also referred to the butterfly effect, concluding with the reminder, “what you do matters.”

In her salutatory address, McCormick likewise spoke about memories with classmates over the years. She also expressed heartfelt thanks for the support of family and friends.

Prior to the salutatorian and valedictorian addresses, Tony Wood, father of Hayden Wood, delivered the Invocation, and Head of School Lisa Moore welcomed the attendees. Graduate Layla Ammon provided a poetry reading.

The senior awards and recognitions were announced at the ceremony. Ammon, McCormick, and Wood were all on the yearbook team. Wood and McCormick were Beta Club members and both earned advanced diplomas.

Because the seniors were not able to take their senior trip for which they had been saving and fundraising, the school board decided to award $,2500 college scholarships to each student. Ammon and Wood plan to attend Liberty University, and McCormick plans to go to Central Virginia Community College.

Board President Tony Bowling presented the graduates with Bibles as gifts from the board. He reminded them how important the Word of God is and observed, “you’ve memorized some of it. I hope you continue to study it.”

Prior to singing, she told the audience, “I have seen these students grow up at FCA from elementary school students to seniors.” She reminded the seniors that growing up was not just limited to their 18 short years, but it is a lifelong process. “You’ll hear a lot of voices clamoring for your attention,” she cautioned them, urging them of the importance of listening for the voice of God and following Him.

Laura Parker delivered the commencement address. She formerly taught middle school English and reading at FCA, including during the class of 2021’s sixth grade year. She currently teaches at Liberty Christian Academy in Lynchburg.

Parker grew up in Senegal, West Africa. Her parents were missionaries serving with New Tribes Mission. She shared some of her experience growing up there as well as words of wisdom from missionary and author Amy Carmichael.

She reminisced with the graduates about their time together back in the sixth grade: reading stories together, learning tough grammar, diagramming sentences, and memorizing the poem “The Village Blacksmith.” She also brought with her the Christmas card that class had made for her all those years ago, a keepsake she has preserved.

Parker exhorted the graduates to read God’s Word every day. “God tells us what is right and what is wrong, even though the world doesn’t accept it. Referring to Scripture passages such as Colossians 1:9-11 and Ephesians 2:10, she cautioned them, “life will not be easy, but our strength comes from God.” With great patience and endurance, they will have to make the decision: “will you live life for yourself or for God?”

Following the address, Ammon presented this year’s installment of a longstanding FCA graduation tradition: a video featuring photos of the graduating seniors.

The graduates’ parents participated in the ceremony. When the seniors went onstage one at a time to receive their diplomas from Moore and Bowling, they also received flowers which they gave to their parents. The parents then turned their own children’s tassels.

Faith Christian Academy is a private, non-denominational, Christian school for students in K-3 through 12th grade, located on Main Street in Hurt. It was founded by the late Louise English. At the close of the ceremony, Moore issued a word of thanks for English’s vision and efforts to make the Christian school a reality.