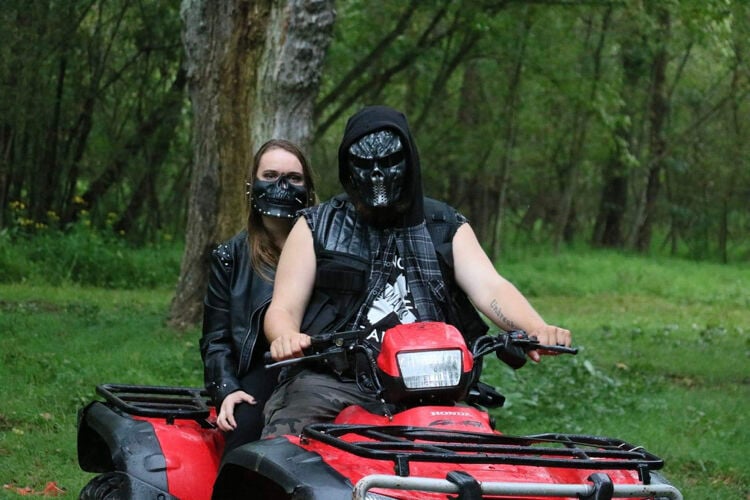 Horstmeyer rides on the back of a four-wheeler with her co-star, Harris. 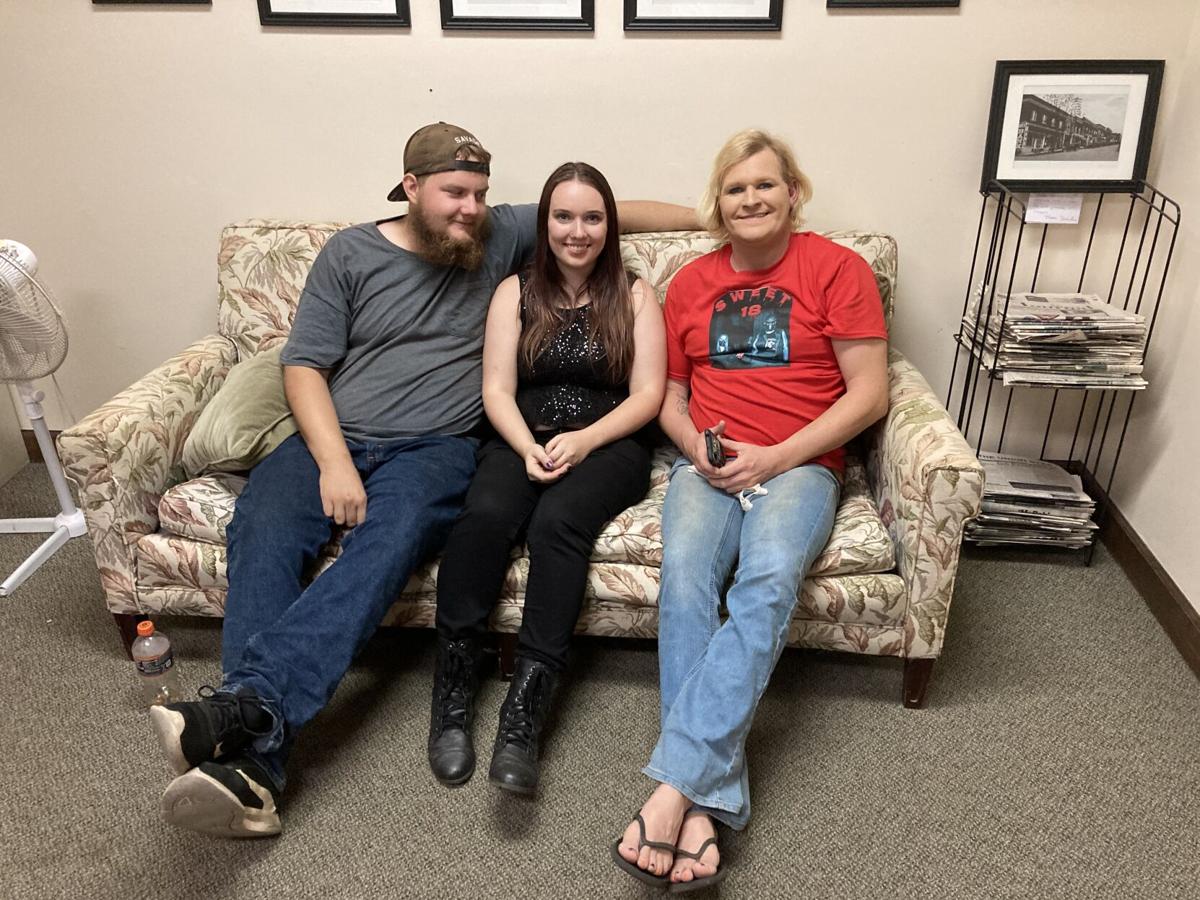 Horstmeyer rides on the back of a four-wheeler with her co-star, Harris.

Lynchburg resident Damous Moss has been playing country music and touring for much of her adult life. Tired and hard-pressed to find gigs, when the pandemic began this spring Moss decided to take a break from music and spend 2020 trying her hand at something new.

“I was sitting at home one day,” Moss said. “The name 18 just popped into my head and I was like ‘man that’d be a good movie.’”

It was that germ of an idea that placed Moss and several other area residents on a path towards making “Sweet 18,” a horror movie and Moss’s feature-film debut, about a murderous couple celebrating their wedding anniversary, and an unlucky teen and her friends celebrating her eighteenth birthday.

First, Moss approached her friend James Harris, a professional wrestler from Altavista, for help with writing. Harris was initially unsure whether he would have enough time to write a movie between wrestling events, but ultimately agreed to work with Moss on the project.

Two weeks later, they had a script. Harris said he used to write poems and short stories in high school, and that writing the movie helped him rediscover an old passion.

“I just realized that, okay, maybe I can do this too,” Harris said about balancing wrestling with his work on the script.

Harris plays one of the leads in the movie, Victor, and makes up one half of the murderous couple the film hinges on, along with fellow co-star Malory Horstmeyer, who plays Lola. The two called each other “co-villains” while discussing their roles.

Horstmeyer had acted in short films before being cast as Lola, but “Sweet 18” will be her feature-film debut. She said she first became involved in acting when she took a drama class in college and was in a production of Agatha Christie’s “The Mouse Trap.” Though she currently works a second job in customer service, Horstmeyer said she wants to act full-time.

“My goal is to make it big in the acting industry,” Horstmeyer said.

Harris and Horstmeyer were fast friends on set, and soon became inseparable.

“I think it was just instant chemistry with me and him and everybody else,” Horstmeyer said about working with Harris.

Harris referenced a running joke that the two were married, and a prank the director pulled in which he tried to convince both Harris and Horstmeyer that they had been legally married after shooting a wedding scene for the movie, going so far as to print a mock marriage certificate.

Though cast and crew gelled quickly once shooting began, in some ways the movie had already been years in the making.

Two years ago, Moss began working on a movie called “Damaged Disciples” before quitting due to a disagreement with the director.

Afterwards, Moss and Harris wrote “Sweet 18.” Moss was then able to enlist the help of much of the cast and crew from “Damaged Disciples,” for “Sweet 18,” landing several actors who had appeared in big-name productions like “House of Cards” and “The Greatest Showman,” and ultimately connecting with a professional director to work with him on the movie.

“We’re like ‘What are we going to do?’” Moss said about losing several actors shortly before filming. “So, I got on the phone.”

She used several friends to fill last-minute vacancies, including local rapper Brandon Two-Tone Anderson, who was originally only supposed to help make music for the film.

An unexpected departure was also how Harris landed his role. Despite having written much of the movie, he said he was surprised to receive a call back to play one of the leads.

“When I wrote it, I wasn’t fully intent on being that lead role,” Harris said.

Still, Harris said the director told him he was a better fit for the role than the actor who was originally cast as Victor anyways, since he was more physically imposing and had wrestling experience that would come in handy for the movie’s fight scenes.

“They thought it would be a good idea to bring me in, and I’m glad I got the call,” Harris said. “I really am. I’ve made a lot of great friends along the way.”

By the time a final cast and crew were assembled, shooting had been delayed by several months, and Moss said things on set started moving quickly.

Shooting began in several bursts starting in October. Most scenes took place in and around Lynchburg and Martinsville. Moss remembers one key stretch in particular, in which she and the rest of the crew got almost no sleep.

Whether it was caused by fatigue or an on-set curse referenced by Harris, shooting wasn’t without difficulty. During one shoot Horstmeyer fell, hurting her knee. Harris separated his shoulder during another. Someone accidentally backed a car into a tree on set.

“But it all came together,” Moss said.

Despite inexperience, casting difficulties and delays, the cast and crew finished shooting in about a month.

“Throughout all the storms, we just pressed on,” Moss said.

The next step will be editing the footage and making music for the movie. Original music by Moss and her band will be featured in the film, along with music from local artist Mandy Rivera, who also worked as script supervisor for the production and Anderson, the aforementioned local rapper who also acted in the movie.

Though the film is far from complete, Horstmeyer said she is thrilled to have finished shooting her first feature-length project.

“It’s my first movie that I actually have a lead speaking role,” Horstmeyer said. “It still amazes me to this day.”

The film’s tentative release date is set for sometime in October 2021, with plans for a trailer to be finished sometime next spring.

“It’s a horror movie, but it’s got some fight sequences that I think the fans are just going to be sitting on the edge of their seats waiting to see what happens next,” Harris said.

Current plans are to try to make Sweet 18 available on a major streaming service like Netflix or Amazon Prime, or to possibly distribute the film with Red Box.

Moss said she, Harris and Horstmeyer all plan to continue working together, and have ideas for several future projects.

Though Harris still plans to continue wrestling, he said the experiences he’s had writing and acting in “Sweet 18” have been invaluable.

“I’m not a very social person,” Harris said. “I never really have been. But meeting the people here, in this movie… I mean I’ve formed friendships and bonds and relationships with people in this movie that are going to be there forever. And it’s really cool to have people that I can actually talk to and count on.”

For her part, Moss is simply enjoying the process.

“Working with cameras and stuff and filming… I just love it,” Moss said. “I just have found a new hobby and a new passion. It’s awesome.”