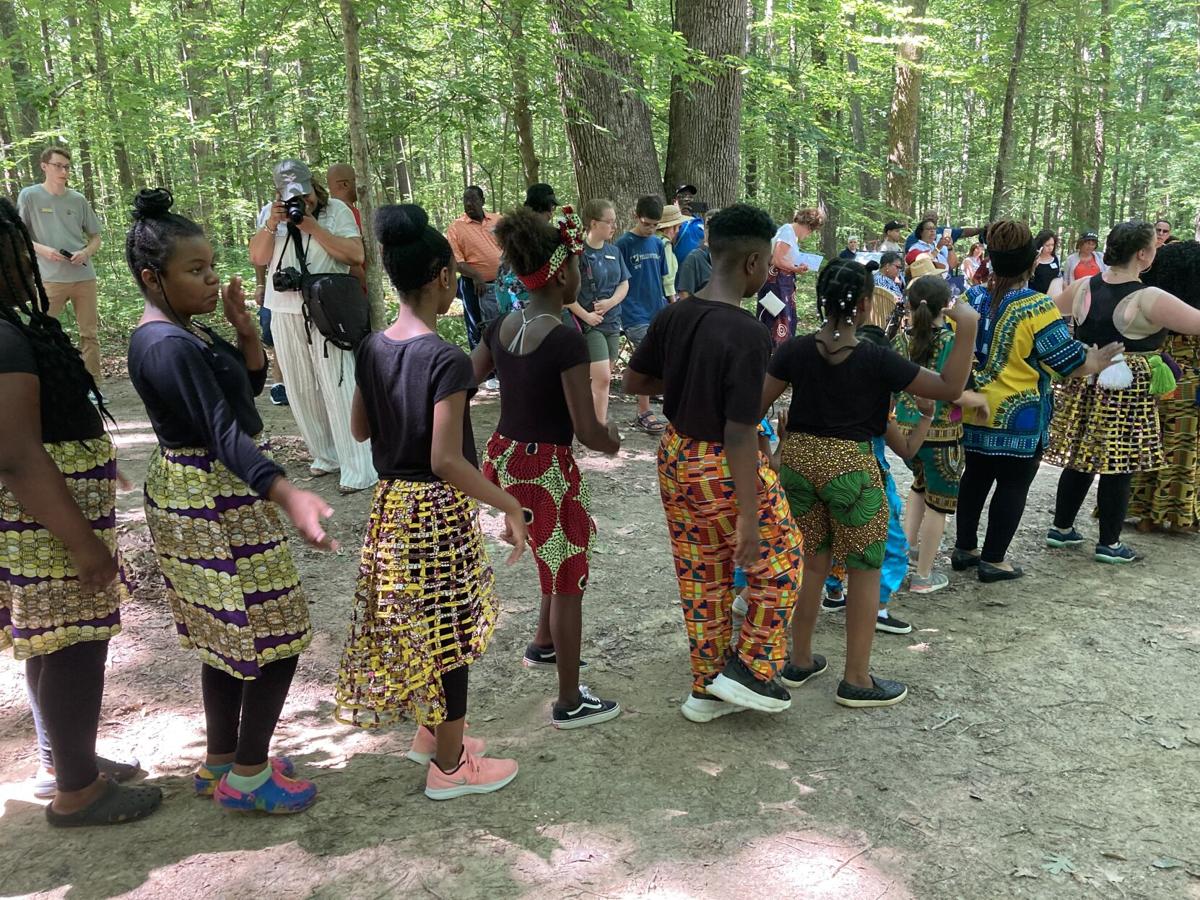 The Kuumba dance ensemble processes into the day's opening ceremony. 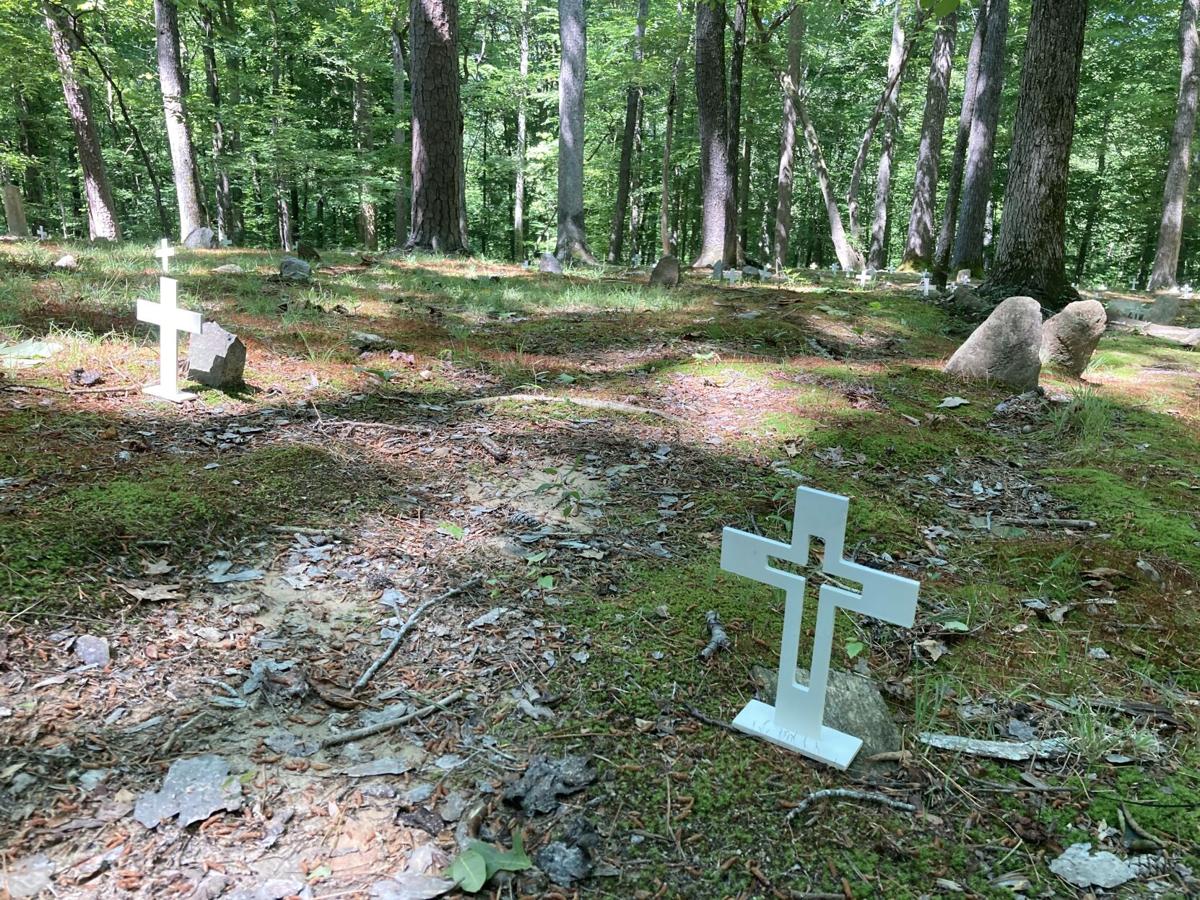 White crosses now dot the cemetery that was discovered at Red Hill.

The Kuumba dance ensemble processes into the day's opening ceremony.

White crosses now dot the cemetery that was discovered at Red Hill.

Last Saturday at Red Hill in Brookneal, Kuumba Dance Ensemble processed towards a plot of land roughly half a mile into the woods on the property. The group, made up of all ages, sang “Wade in the Water,” as they went.

They were traveling to a recently-discovered cemetery. It holds the remains of 147 enslaved people who lived, worked and suffered at Red Hill centuries ago. Red Hill’s staff has been researching the history of these people, and worked with various locals and members of the African American community to host an event to honor the lives of those who were enslaved on the plantation.

Drumbeats and rhythmic steps filled the path to the cemetery, as the procession passed the underground remains of countless enslaved people’s dwellings. Once at the cemetery, the dancers stopped in the middle of a crowd of onlookers. Other than a single marked tombstone, only the recent additions of white crosses on the ground and a black, plaited rope encompassing the site distinguish it from the surrounding forest.

The Reverend Dr. Ceasor Johnson framed the day by reminding those who came to the ceremony of the importance of remembering one’s history.

“We’re here to say that they were here,” Johnson said, “they contributed, and they left a legacy of love.”

Johnson also thanked the staff of Red Hill for researching the history of the site, and setting aside a day to honor the enslaved people who are buried there. According to staff, Red Hill plans to hold an annual event to recognize those who are buried at the site.

In addition to musical performances and a handful of speakers, Sasha Erpenbach, a Master’s candidate at George Washington University and Peighton Young, a P.h.D. candidate at William and Mary, both of whom have been Red Hill’s formerly enslaved inhabitants for at least a year, then read a list of 40 names that Red Hill staff, namely Erpenbach, has verified are buried in the cemetery.

“Let’s celebrate those lives,” Johnson said to applause after Erpenbach and Young were finished reading.

After the ceremony at the cemetery was over, attendees were treated to lunch on Red Hill’s grounds, and heard from Red Hill CEO Hope Marstin about the discovery of the cemetery and Red Hill’s future plans for exhibits and events preserving the history of the enslaved people who once lived on the property.

The event took months of meetings between Red Hill staff and a community engagement committee made up of descendants and community leaders to plan.

“I’ve done descendants’ day programming for a while,” Young said about the event. “This is the biggest one I’ve ever been to.”

Erpenbach credited Marstin with making sure descendants were able to determine what the day should look and feel like. She also said Dr. Gloria Braxton, who led the event’s community engagement committee, was in large part responsible for bringing so many different parts of the community together for the event.

Braxton’s great grandparents, Scotchman and Martha Henry, lived and worked on Red Hill well over a century ago. Growing up, she said she had always heard her family came from “Patrick Henry’s farm.”

“We never heard ‘Red Hill,’” Braxton said. “We just heard Patrick Henry’s farm, because plantation was not a word that was popular and that we knew.”

For his part, Johnson said he felt Red Hill’s actions were a step in the right direction towards building relationships with the African American community right at its doorstep.

“Some of these people grew up here, were born here, are buried here—but they’re not a part of the fabric here,” Johnson said. “For everybody to come in and say ‘we’re going to celebrate these African Americans who were enslaved here, died here, worked here—we’re going to acknowledge that they were here’—that’s tremendous,” Johnson said.

Bernard Pannell, who lives roughly a mile from Red Hill, has ancestors buried in Red Hill’s recently-honored cemetery and who grew up playing with residents of the Patrick Henry’s Boys Home, had a handful of his grandchildren with him during the ceremony that day.

This weekend was the first time in years he had been on the property. When asked how his day had been, Pannell responded: