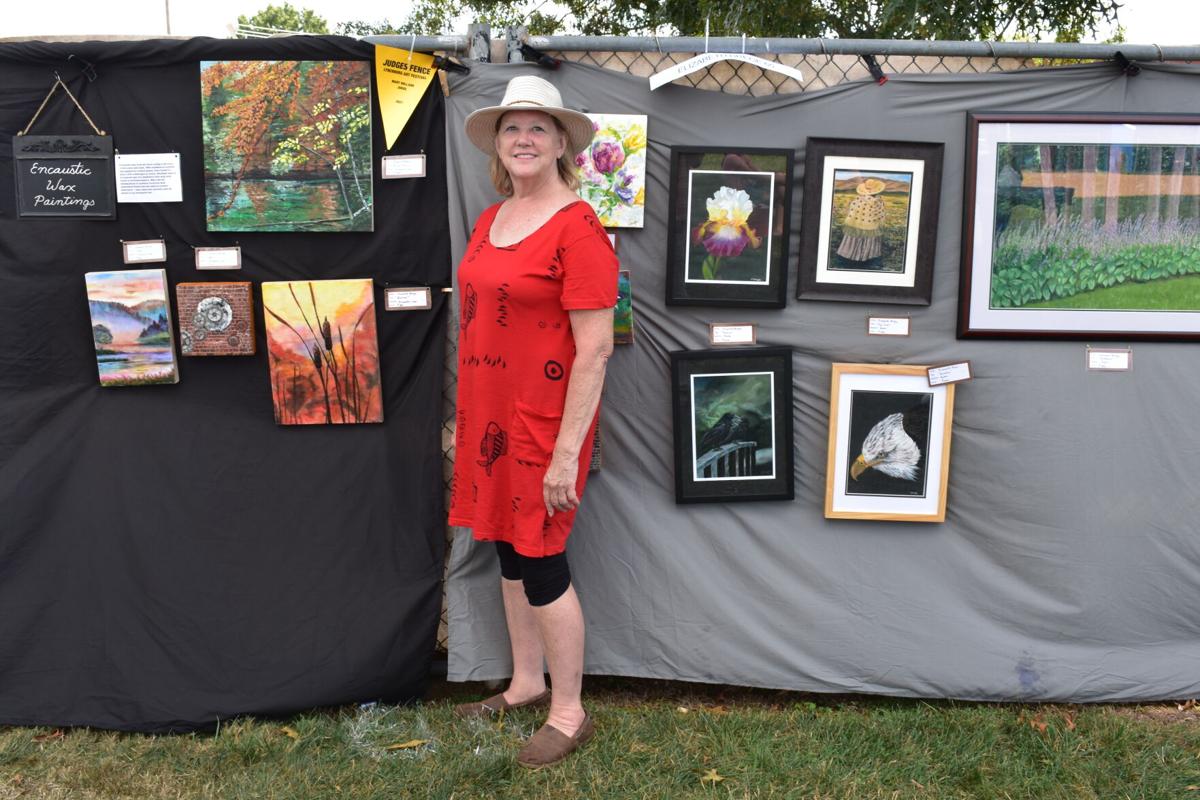 Elizabeth Brege with her paintings. Brege was able to sell several pieces at the festival. 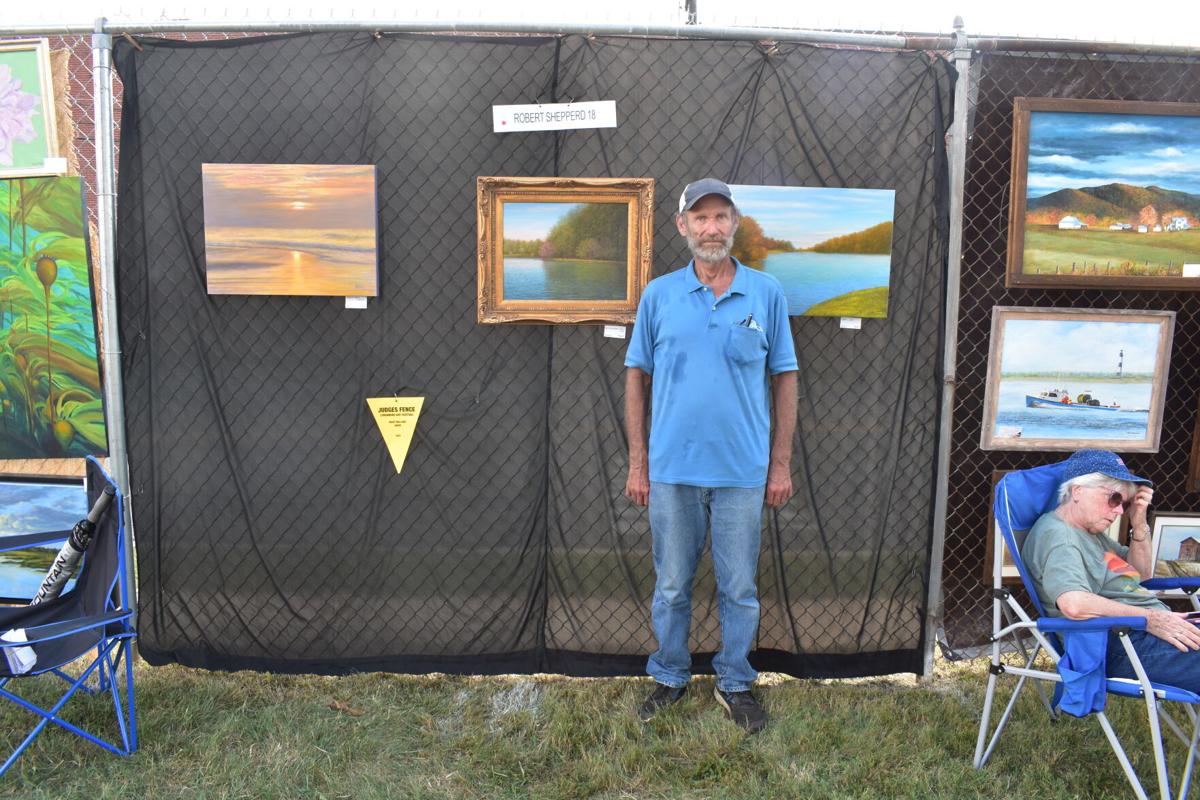 Robert Shepperd with his paintings. Shepperd has exhibited work at the last 11 Lynchburg Art Festivals. 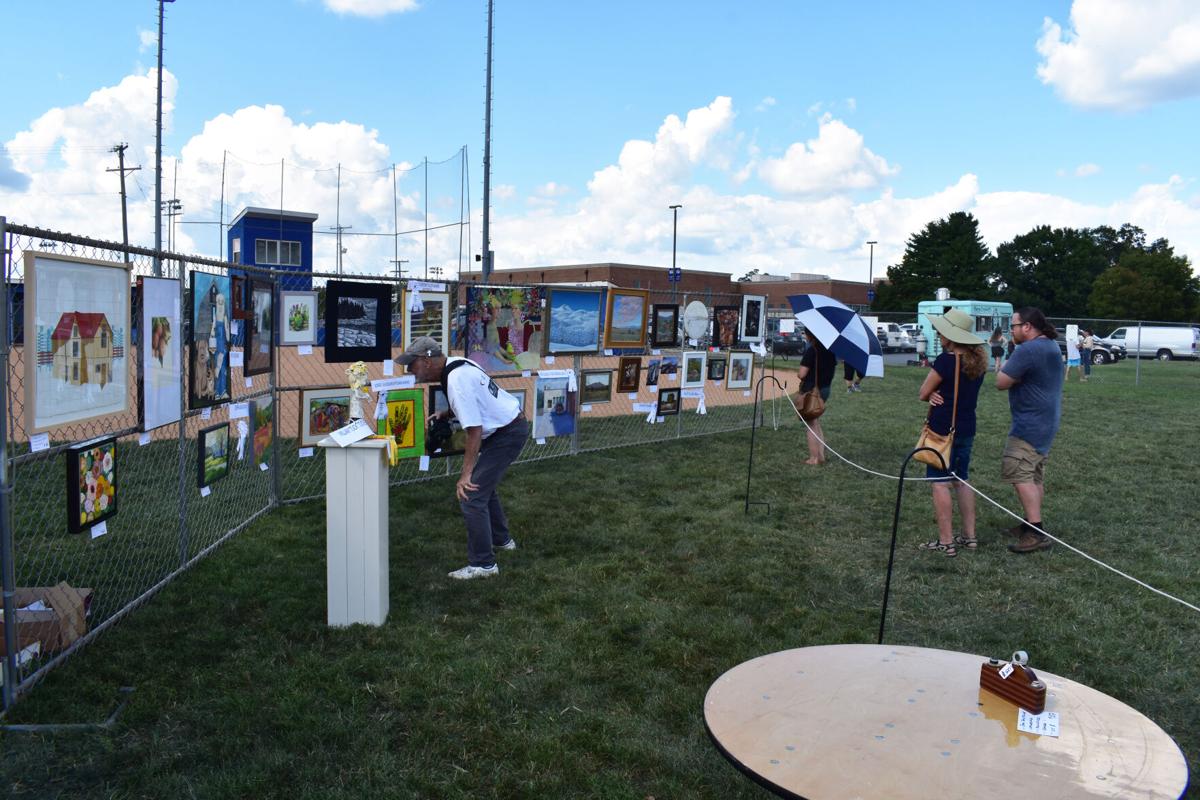 66 works of art were selected for the judge's wall. From that group, the festival's winners were chosen.

Elizabeth Brege with her paintings. Brege was able to sell several pieces at the festival.

Robert Shepperd with his paintings. Shepperd has exhibited work at the last 11 Lynchburg Art Festivals.

66 works of art were selected for the judge's wall. From that group, the festival's winners were chosen.

The event is free to attend, though artists must pay to display their work, and draws hundreds of artists from Lynchburg and around the Commonwealth. Hundreds more come to browse through myriad paintings of all kinds. Proceeds go towards a scholarship fund for art students. The festival provides an outlet for artists like Elizabeth Brege, a Gladys resident who started painting several years ago, all the way up to artists who have honed their craft over decades.

“It’s a great time,” Brege said about the festival.

To spend any length of time at the festival is to encounter hundreds of different tastes, perspectives and styles in each artist’s work. Brege, for instance, is fond of landscapes, often using reference images, but not always. When she makes encaustic paintings, a process that uses a mixture of pigments with hot, liquid wax, she generally works from imagination.

To make her encaustics, Brege applies a mixture of beeswax and resin to her painting surface, before fusing both elements together by applying heat. It’s a manifold process—each new color calls for another layer of encaustic medium—that can involve sculpting too. Brege’s landscapes serve as prime examples of this step in the process, each leaf in one of her paintings, “Autumn at the River,” popping from its branch, forming something like a string of bright, rounded bulbs.

Brege said she has started working with oils and acrylics, but added “mostly I like the wax.”

Brege, who picked up painting shortly before she retired five years ago, first came to the festival two years ago. On the other hand, Evington resident Robert Shepperd said he has been coming to the festival off and on since 1987, and has participated for the last 11 years in a row.

“I just like painting the natural beauty of Central Virginia, and I love water,” Shepperd said. “I like doing ocean scenes, and scenes of Smith Mountain Lake, or anything with water. Since I grew up in South Florida surrounded by water, I always gravitated towards that.”

Shepperd started painting in 1986. He was in his early 30s. He knew he could draw, and had always wanted to give painting a try.

“When I started out, I didn’t really like the job I had, and wanted to see how I could do with art,” He said. “Of course I didn’t even show my work until about a year after I started painting. But then it soon caught on and started selling. I tried to make a living so as a result, I had to paint fast and sell cheap.”

Shepperd went to shows throughout the state, but traveling expenses made it difficult to make money. He said he stuck it out for about five years before returning to a day job. He continued painting and traveling to art shows for a time, before taking a 13-year hiatus from painting altogether In 1994.

He wandered back to his old passion in 2007, painting a small, 8x10” image of a barn in Bedford County on a whim. He kept it for years, but finally sold it this weekend.

These days, the Lynchburg Art Festival is the only show Shepperd brings his artwork to, though he still paints often. He brought five paintings this year, down from his usual 20 or so, because he had to help his mother recoup from an injury during much of the last year.

Shepperd usually paints several times per week, but said he was painting every day leading up to the festival. His goal is generally to recreate scenes as realistically as possible, while still giving them a personal touch. He is a member of the Lynchburg Art Club, and has had work exhibited in the Altavista Area YMCA in the past.

He often paints with music in the background. He tries to work for the length of a CD, about an hour, before taking a break.

“I think it takes my mind off the painting itself and I just kind of let instinct take over,” Shepperd said.

He paints to Louis Armstrong, Django Reinhardt, the Beatles and the Rolling Stones, among others—but not Led Zeppelin. “Little too hard on the ears,” he explained.

Sometimes Shepperd paints in time to the music, especially if he’s working on something repetitious, like the colorful streaks that adorn many of the bodies of water he paints.

Shepperd finished “Moon Shadows,” a painting that was ultimately selected for the judge’s wall, the night before the festival. 66 artworks made this year’s judge’s wall, of which a final 21 won in various categories sponsored by local businesses. Mary Holland, director of the Virginia Museum of Fine Arts Studio School in Richmond, judged this year’s event.

Shepperd’s “Moon Shadows” shows a pier extending from a South Florida beach into the ocean under a full moon. One might call it a classic Shepperd image. He spoke excitedly about the piece, but at this stage in his career, exhibiting his work is no longer the main draw for Shepperd, who has befriended many in the Lynchburg area art scene over the years, to come to the festival.

“As long as I come out ahead a little bit, and get to see everybody,” he said. “That’s the main thing.”